Hi guys! I’ve been hammering away at this Clariel here. Using some new techniques and some old ones too.

I’ve also been doing some more research on the Shadowhunter runes in order to discover which ones, exactly, appear on the hilts of the blades in the TV show.

Which rune is that on the pommel? I’ve done quite a bit of hunting and I have not found that precise one in the Codex or anywhere else for that matter. Is it meant to be a rune known only to the Iron Sisters? Something involved in the creation process of the Seraph Blades? Or did the props team simply screw up?

After painstakingly comparing the design on the prop to the runes we know of, I settled on this rune as the one they most probably intended:

Things can get hairy when working with clay and I wouldn’t be at all surprised if a Heightened Speed rune got a little smooshed during the crafting process and then accidentally reproduced that way without the mistake being caught.

What about the rune in the middle of the hilt though? It’s almost totally obscured by the wrappings. 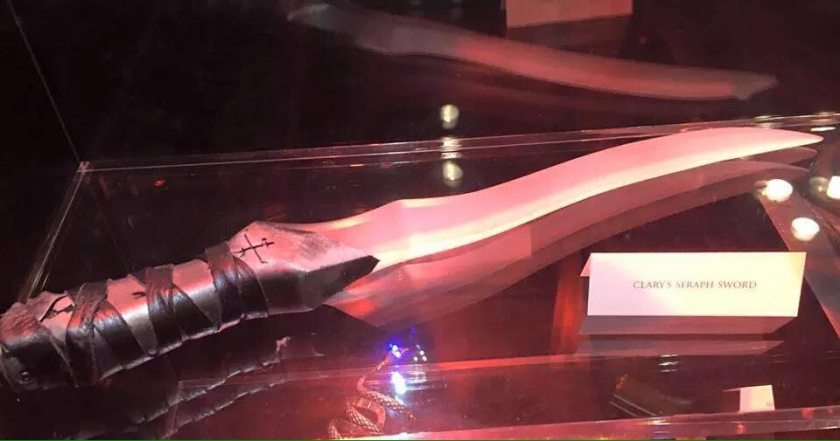 All I have to go on is that little Y-shaped stick at the top. That’s not much of a hint. I had about four guesses, and settled on one that would make the most sense for a seraph blade. 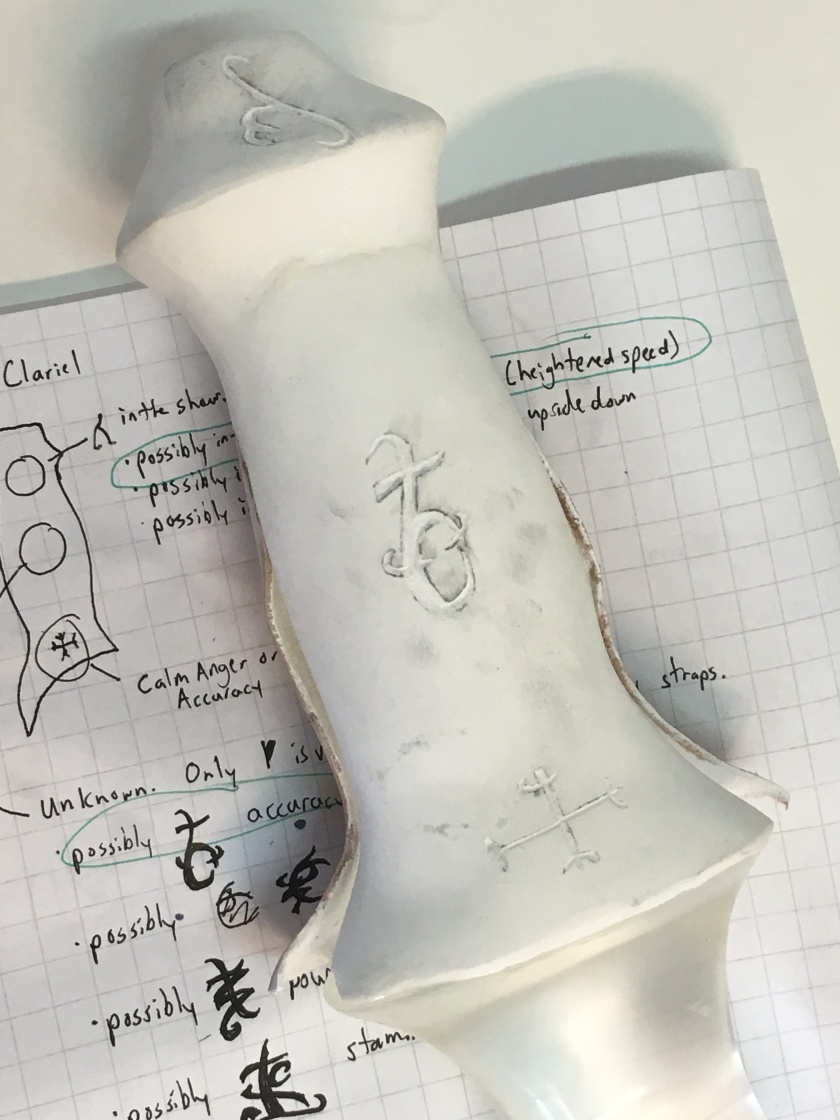 Accuracy. Flexibility might have also worked but it’s C-shaped and would probably be showing the other end of the C above the wrappings and would have to be turned on its side to look like that. Power could have been a possibility but, again, the other end of the Z-shape would probably be showing as well? Stamina was another possibility but it would have had to be tilted diagonally to avoid showing the other part of the “t” above the wrappings. Accuracy seemed like our most likely candidate.

Hang on, but isn’t Accuracy already on the sword at the bottom? Well … as you’ve probably already discovered while studying the runes for yourself, some of them have been re-labeled between adaptations from book to movie, and movie/book to TV show. The rune at the bottom there appears as “Calm Anger” on the Shadowhunter wiki.

What’s an Iron Brother to do? Well, keep doing my research and maintain my commitment to bringing you the very best art I can! I started making Seraph Blades for the sheer love of Cassandra Clare’s The Mortal Instruments series and that affection has not faded with time. It can be a bit of a struggle to make a judgement call on whether to follow the books or the TV show when a discrepancy arises. I tend to side with the books, personally, because there’s more info available and because it’s closer to Clare’s original concept of the Shadowhunters world.

Do feel free to respond to any of my posts either here or on my Facebook page. It’s just not as fun if it’s only me here talking. LOL! Let me know what you want to see me make! Ask questions! It’s all good. I answer whenever I can on weekdays. 🙂

Ciao for now everybody. I gotta go get painting!

Last week was quite productive.

Got the leather measured, cut, and shaped for the handle. And I also got all the runes engraved. The leather shrunk more than expected as the leather paint dried so I decided to smooth and bulk out the edges with an air-drying polymer clay.

It’s messy at the moment but I let it be so that it would dry nicely. I can sand the edges today and get it all prettied up. I liked working with the clay so much I think it might be the beginning of a new way to do the handles! We’ll see what the end result is to know for sure. I keep working toward my dream of a beautiful seamless sword.

There’s no such thing as impossible; only things we haven’t learned how to do yet.

Hm, does that shape look familiar? I sure hope so! 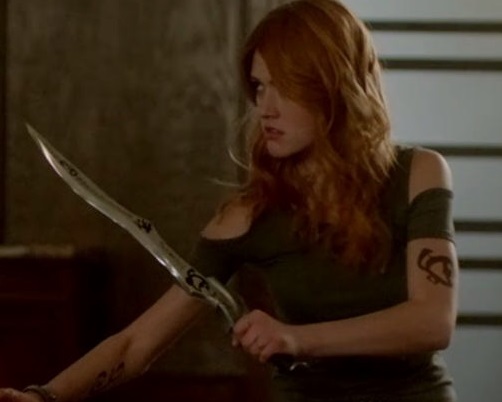 This blade is a re-imagining of what the Morgenstern short sword might look like if it had been crafted from adamas. The Shadowhunter who ordered it specified which runes she liked and we put our own spin on the piece. I think it came out rather well.

So exactly how hard is it to engrave on a curved piece of acrylic with no router or CNC milling machine? Well, on a scale of 1-10 it’s somewhere between 12 and crying in the fetal position. See, the lovely thing about automatic machines is that they are very stable and they don’t get tired. Hand-engraving with the Dremel tool requires the craftsman to hold his body and arms perfectly rigid and force the tool to stay in one place when all it really wants to do is skitter off into Narnia.

The other challenge was cutting 90-degree angles and sharp corners. I have a Dremel tool, a Bosch multi-tool, and Chewie my faithful belt sander. So how do we get these kind of angles?

Needless to say, Heosphoros challenged me and pushed me to my limits.

I think it came out pretty nice though. 😉

The pommel is actually made of pine but thanks to the wonders of paint and a really nice high-gloss sealer it not only looks like metal but also feels like it too. It’s pretty fun to watch people run their fingers over it and then, perplexed, ask “what’s it made out of?” I figure that if you can’t really tell even after touching it, I’m doing a decent job.

The runes themselves are inlaid with liquid acrylic (yes the stuff that smells like Satan’s personal urinal when it’s curing) and then inlaid again with a semi-transparent lacquer. I had to do this for two reasons: #1 It’s impossible to smooth out the tool marks from the engraving without using the acrylic because I don’t have a CNC milling machine or laser cutter, and #2 the acrylic is so clear that they were too hard to see without adding some opacity.

Hopefully you’ve enjoyed this post. Sorry it’s been a long while between updates. I’ve been pretty busy and now you can see what I was working on! 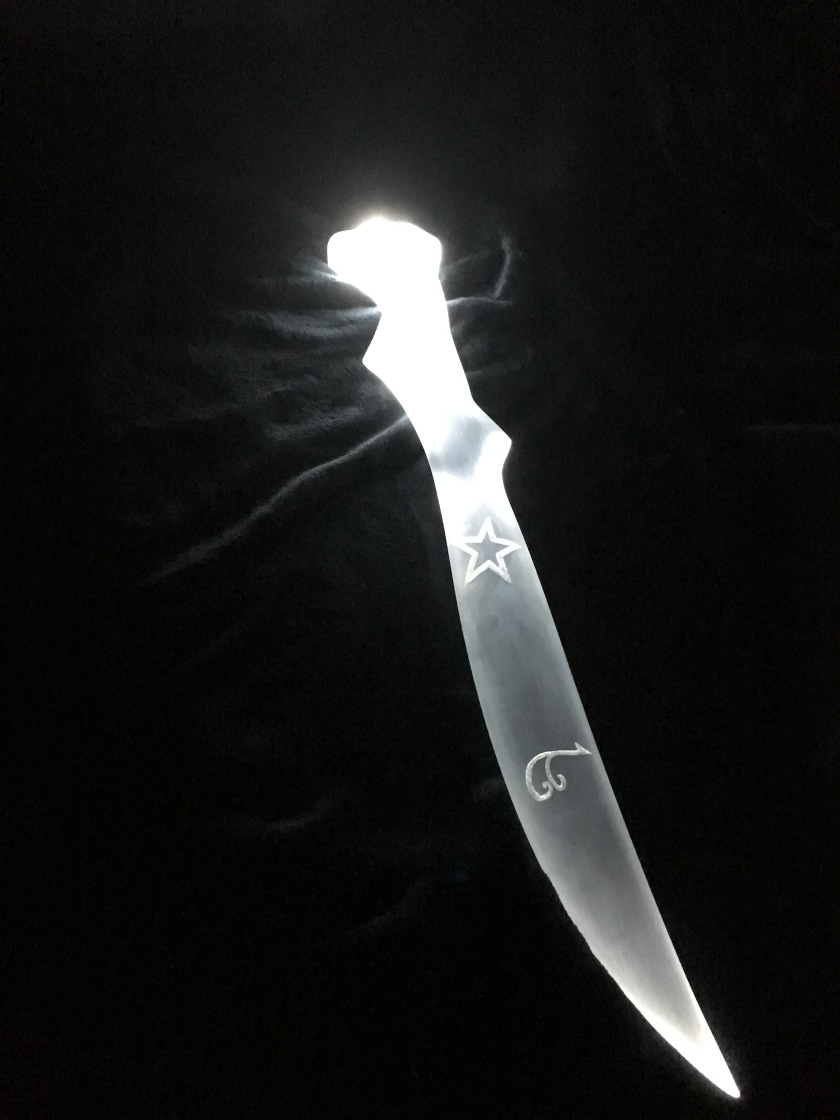 Hopefully, it won’t be so long between posts next time. I’d like to give you a wee presentation on some product testing I’ve been doing and some neat ideas I have for future creations.

That’s all from me for now. I’ve got to dash off to the workshop and get started on the next sword. Until next time, stay safe out there Shadowhunters. 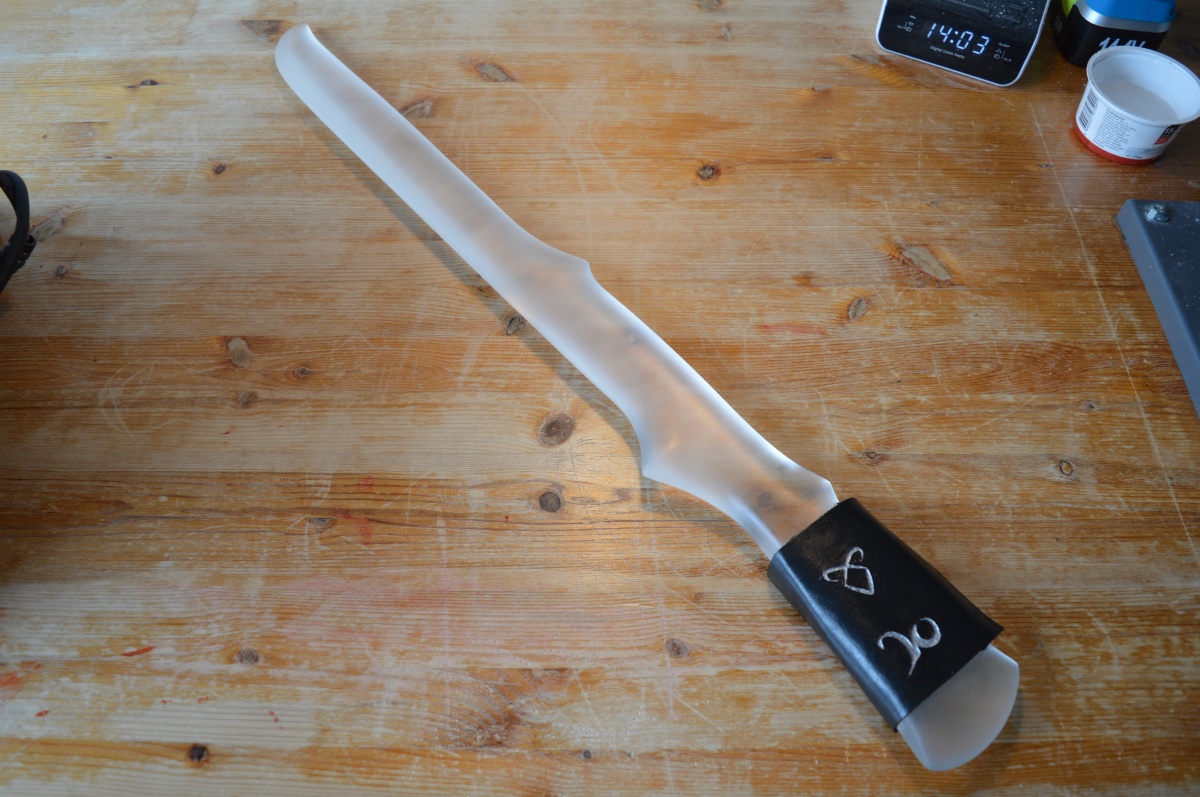 I’ve had some questions about engraving runes into the grip of the sword. The most frequently asked one is: what does it look like?

Here’s my most recent Azrael style sword with runes for your viewing pleasure. 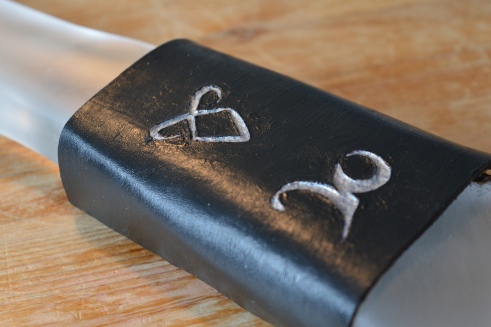 Anyone want to guess which runes those are? C’mon, put on a Fearless rune and shout ’em out!