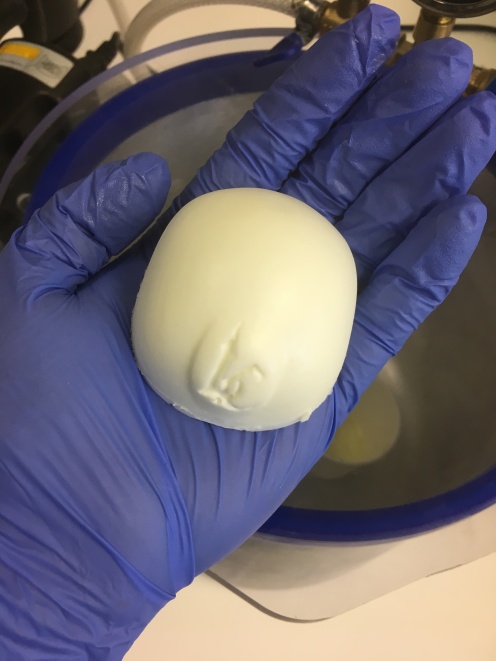 Here’s the back of Malachai’s head with Lost Chronicles’ logo loud and proud. Isn’t it a lovely design? The edges are rough cause it’s popped fresh out of the mould with no sanding just yet. That comes later. Busy busy busy!

They’re multiplying … o_o Taking over the workshop! Somebody help before they —

Hehe just kidding. They’ve been mostly well behaved. Mostly. I’ve had some odd bubble issues to the degree that I actually had to alter the mould and give more room for the gas to escape from the resin. All of the bubbles occurred right at the top of the mould so at least fixing them should be reasonably easy. Well … as easy as manually filling the tiny voids with tiny amounts of mixed resin and then sanding it back down flat so no imperfections remain.

In fact, I was just about to start that process when …

What the heck is this?! This is the Part B jug of my white resin. It has chunks in it like orange juice pulp! How? Why? Dammit I can’t use this! I will have to contact the seller and figure out what’s going on. Ugh!

In the meantime, I will be exploring other options. This resin sets in only two minutes. That’s clearly not enough time for all the air to get out despite the mould being very well vented. I’m looking at the very real possibility of having to use a different resin that sets more slowly … which probably means casting all those heads over again. -_- But if that’s what I have to do, I will do so at my own expense, as per usual. I have a policy of not making customers pay for my mistakes.

Now, despite my adventures in Doll Land, yes I do still make swords everybody, don’t panic. In fact, I have two lovely Clariel swords waiting to be purchased on my Etsy shop.

Now I’ve got to poke my resin seller to see what’s wrong with the stuff they sold me and get to the workshop to do some more experimentation. Wish me luck!