So there I was in the workshop, mixing up the resin for a sword. The resin had gelled so I had to re-liquefy it. No big deal, right? Well, despite it being the same resin I used to make the sabre for the Arabian Nights pinball machine, this one did not turn out completely clear.

It has clouds in it.

Now, this would be a difficult task to achieve on purpose. To do it purposefully, I would have to mix up a separate batch of resin with white dye, then do some very skilful pouring to get this kind of effect in a completely opaque mould without being able to see what I’m doing.

What happened? I have no idea. I’ve asked Hardcore Craft and they haven’t responded. There is no dye in this sword at all. It just did this by itself. The white parts are fully hardened. They don’t take any impression from a fingernail as I’d expect if it wasn’t fully cured. I’m baffled, to be honest.

What will I do with it? Finish it of course! But I can’t really say that it’s a Seraph Blade. Every Shadowhunters fan knows that a Shadowhunter’s blades are made of adamas, which is a crystal clear metal with angelic properties. Looks like glass, hits like mithril.

It will be an art piece, for sure. I’m just going to let the blade suggest its personality to me and trust in the crafting process.

That’s all from me for now. See ya later! 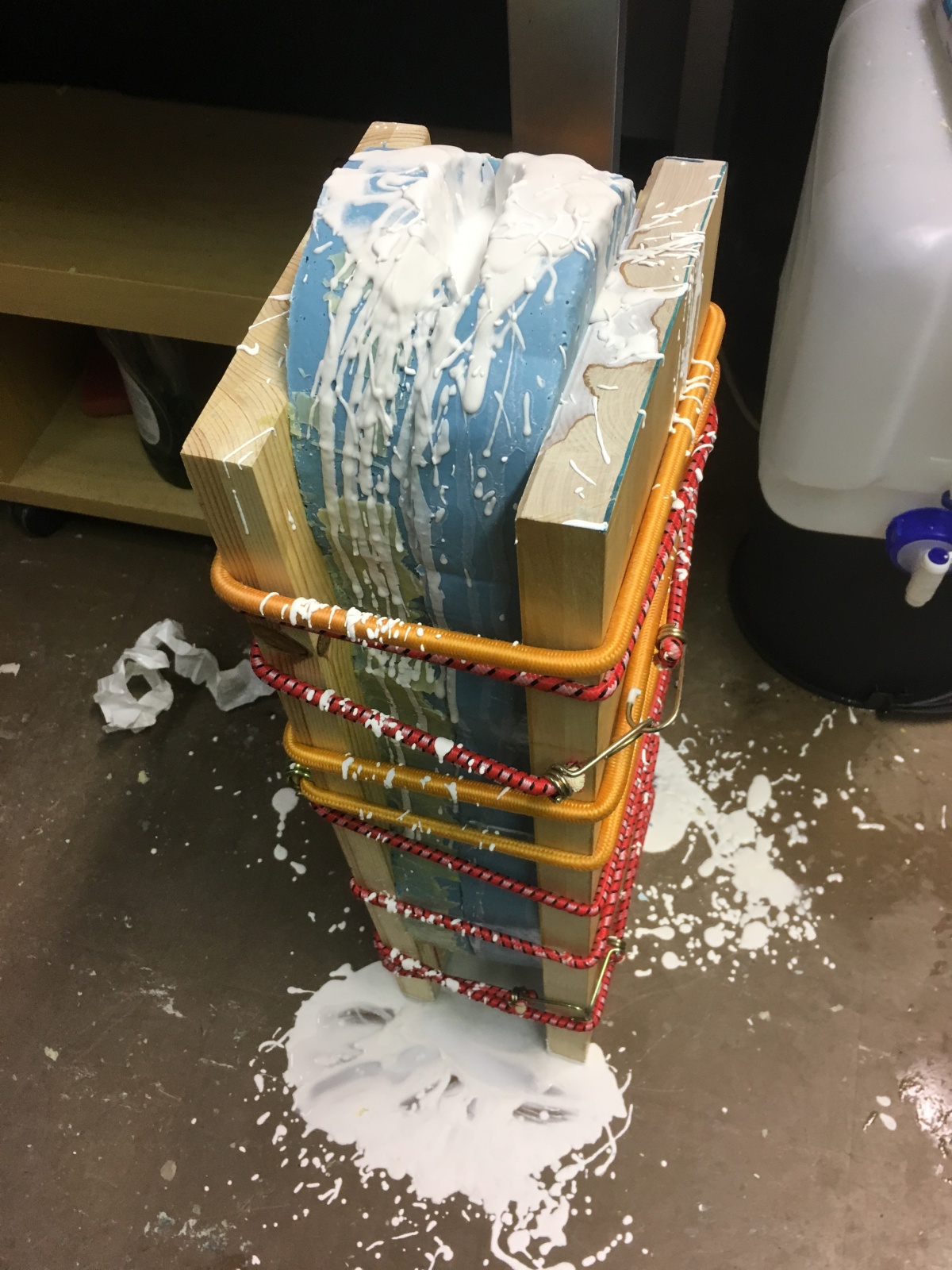 No really, I’m quite pleased with myself. It is a gigantic mess and I have a lot of cleaning up to do in the workshop today, but this mess has resulted in a major breakthrough. This post marks the sum of months of trial and error, experimentation, swearing, epic messes, and more money than I’d like to admit. I’ve finally gotten something worthwhile out of it all. Let me share my joy with you!

Remember I was making the mould for the prototype of Zaapiel, that fancy Arabian Nights sword? Yesss, I got both halves of that mould completed. I made the mould out of alginate (a moulding compound that is essentially … well … algae), with a coating of wax in between to make 100% sure the sides wouldn’t stick to each other.

Now, the thing you have to know about alginate is that it’s only good as long as it’s moist. Once it starts drying out, it gets crumbly and it’s not much use for casting anymore. So you have to work quickly and if you’ve got to do the mould in multiple stages or something happens and you have to use it later than you intended, you have to protect it from evaporating off its moisture. Most people put it in a sealed container in the fridge. This … this is way too big for a conventional fridge or normal food container. I improvised with a combination of wax and wet plastic wrap. It was an ugly hack job, but it worked.

Snazzy! Algnate is nice and soft, kinda like tofu in texture. So it’s easy to cut the sprue and the air traps in it. The downside is you have to be gentle when handling it or it will crack or rip easily!

So! I cleaned off all the wax as best I could, put both halves together and strapped it between two wooden boards. Then I mixed up a batch of Artestone (a special gypsum plaster with hydrophobic properties) and poured it into the mould. And that’s when the mess happened.

A puddle of white began expanding from beneath the mould and I realised that there was a leak. I had a problem. I couldn’t just stop the whole thing and open up the mould at this point because then all  the plaster would pour out onto the floor and I’d have wasted the whole thing. So all I could do was grab the closest thing at hand–a large stirring spoon–and frantically scoop the goo back into the mould until it hardened enough to stop pouring out.

There I was, on the floor, scuttling like a crab from the back of the mould to the front of the mould back and forth, scooping at the puddle expanding on either side of it with a spoon of all things. A stream of plaster coming out of the mould, a stream of profanity coming out of me, and by the time the goo hardened enough to form a seal and stop going everywhere, I was laughing my head off. Really what else can you do at that point?

Seriously, it looks like I got bombarded by a gigantic seagull who ate way too much curry. I had to mix up about 200mL more artestone to replace what was lost out the bottom, but I did manage to complete that pour with no further disasters. My neighbour probably thinks I’m insane now. … He’s probably right. LOL!

Now this looks blobby and weird right now but that is completely what I expected it to be. What I need this prototype sword to be is roughly the right shape and a little larger and chubbier than the finished product is going to be. This is so I can do all the final shaping, sanding, and polishing without it ending up too thin or shorter than I wanted. Basically: It’s way easier to sand things off than it is to add things on. So this baby gave me exactly what I wanted. Woohoo!

That was an adventure!

I am sad to report, though, that we had one casualty during this adventure. One of the straps on my protective face mask broke. That’s the third breakage I’ve had on this mask and there isn’t enough strap left to cobble it back together so I have to replace the strap entirely. That’s going to take a little time that I’d really rather be spending on crafting. But it needs to be in proper working order because there is NO way I am sanding any of the materials I work with without respiratory protection.

Safety gear is NOT optional!

So! If anybody needs me, I’ll be scraping uhhh … 300ish mL of extra-hard water resistant plaster off the floor! 😀 … Pray for me. LOL