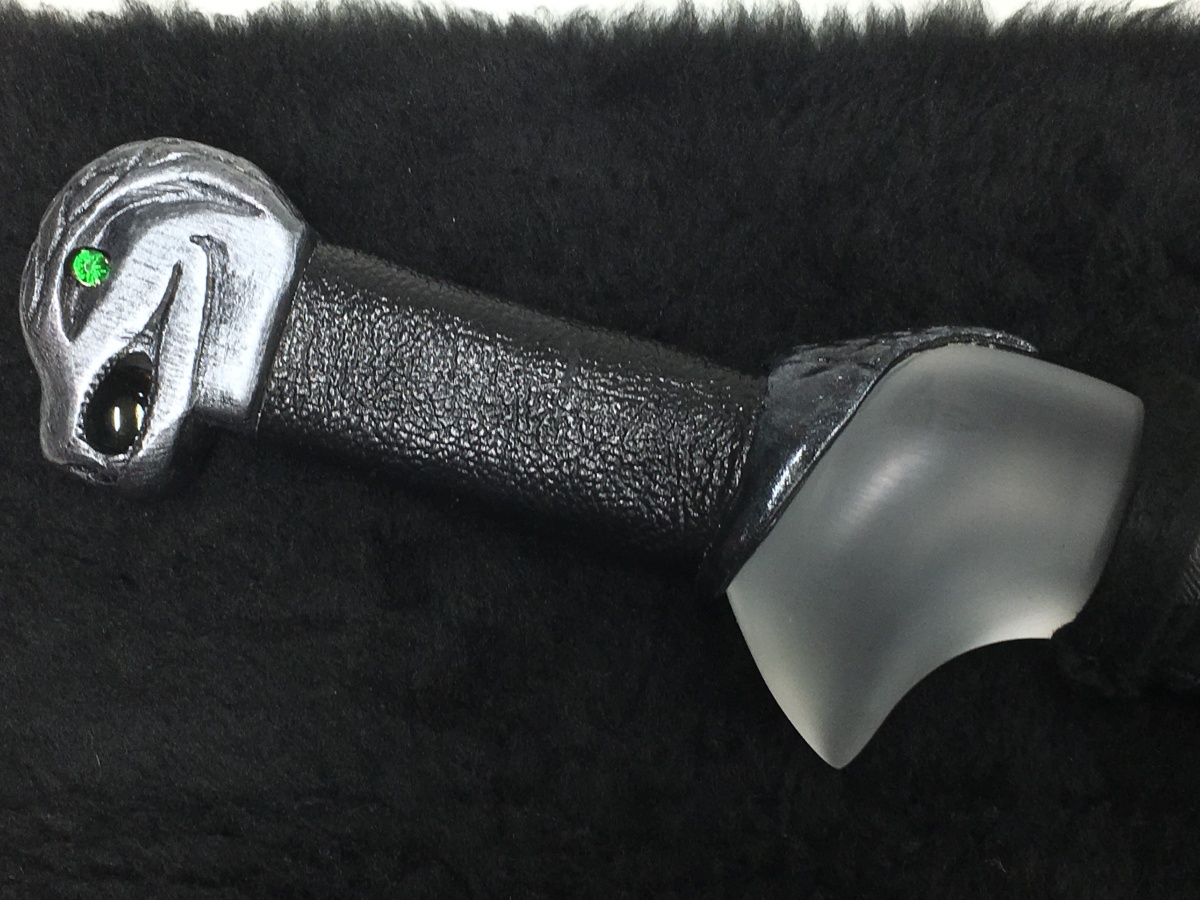 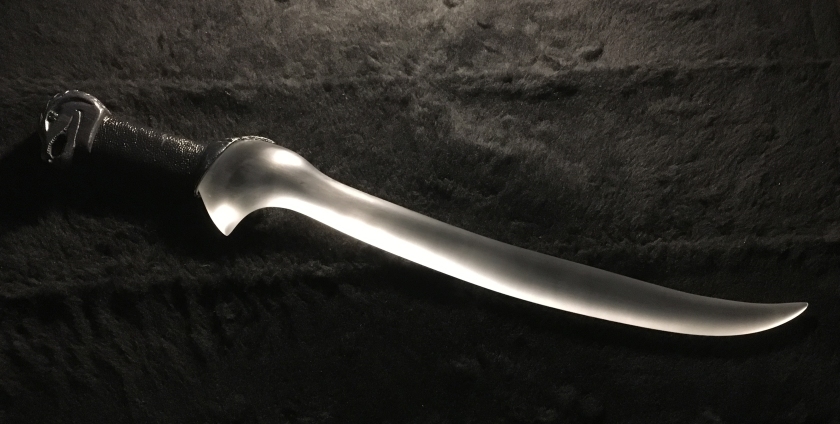 I had so much fun making this. I had never worked with wood before so carving the snake head on the pommel was an exciting new challenge. After carving the nightmarishly hard acrylic, my tools sliced through the solid pine like a piece of bread! I actually had to be careful not to use too much force.

The blade style itself was based on the Jahoel model. I made it longer, wider, and curved the spike forward instead of at a 90 degree angle with the handle. 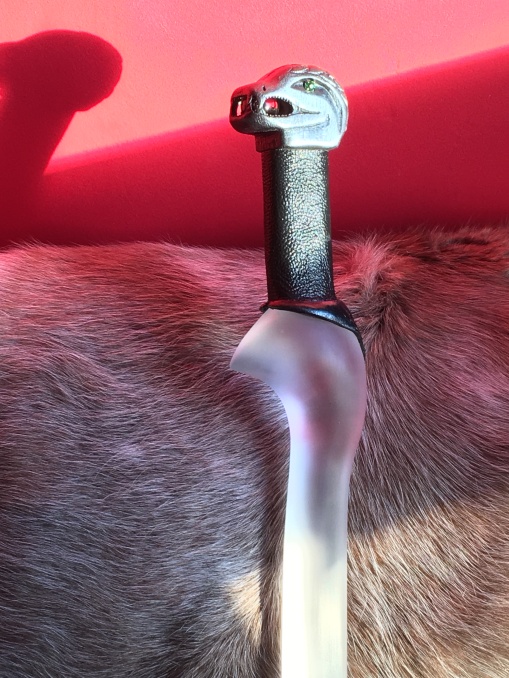 The crystals in its eyes are faux emeralds made from acrylic and the crystal ball trapped in the mouth is made of glass.

This is also the first time I have added a sheath to the bundle.

This sheath has a hard spine of stiffened canvas to make sure it keeps its shape and allow the wearer to draw and return the sword easily. It’s fully lined with a fine, soft felt to protect the blade from scratches.

The sheath was actually the most difficult part of the whole piece if you can believe it! I had never used this kind of fabric stiffener before and I was so glad it behaved like I thought it would. Getting the it fitted precisely to the curve and the width of the sword was really challenging. If the sheath is too loose, the sword might slip out and that just won’t do! All the same, it can’t be too snug or it will be too hard to get the sword in and out of it.

Please allow me to share a pic of the fitting process because I think you’ll find it just as funny as I did. 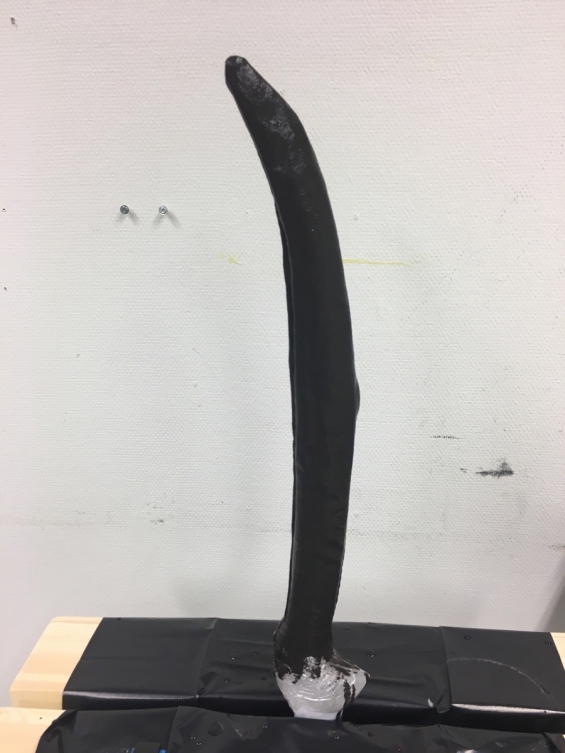 Behold! The giant chocolate fondue banana! I’m not sure if that would make me the most popular Iron Sister or get me kicked out of the Citadel immediately…

I’ve been thinking of doing a short photo series illustrating how to wear a sword and how to draw and put it back in the sheath. Essentially “How to handle a cosplay sword and make it look like you know what you’re doing.” Would anybody be interested in such a thing? I’m not a master at any form of martial arts but I have studied a few years in Bujinkan ninjutsu so I can at least draw and return a sword without dropping the thing. (most of the time anyway …) Super duper basics but better than nothing for folks who haven’t had any training at all? Maybe? I dunno, what do you guys think?

I’ve already got a new project clamped to the cutting table and I’m eager to get carving. I’ll plop one more pic here and dash off to work. See ya later Shadowhunters! 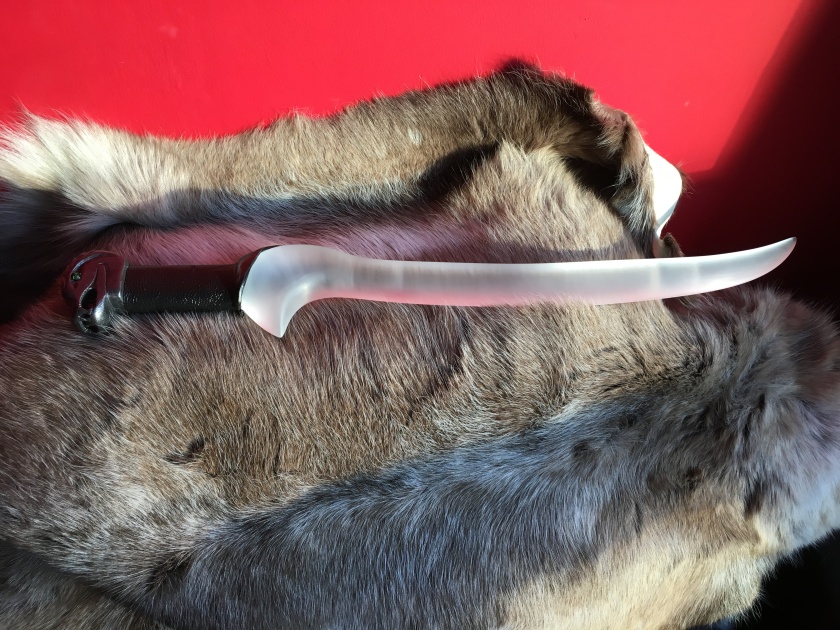 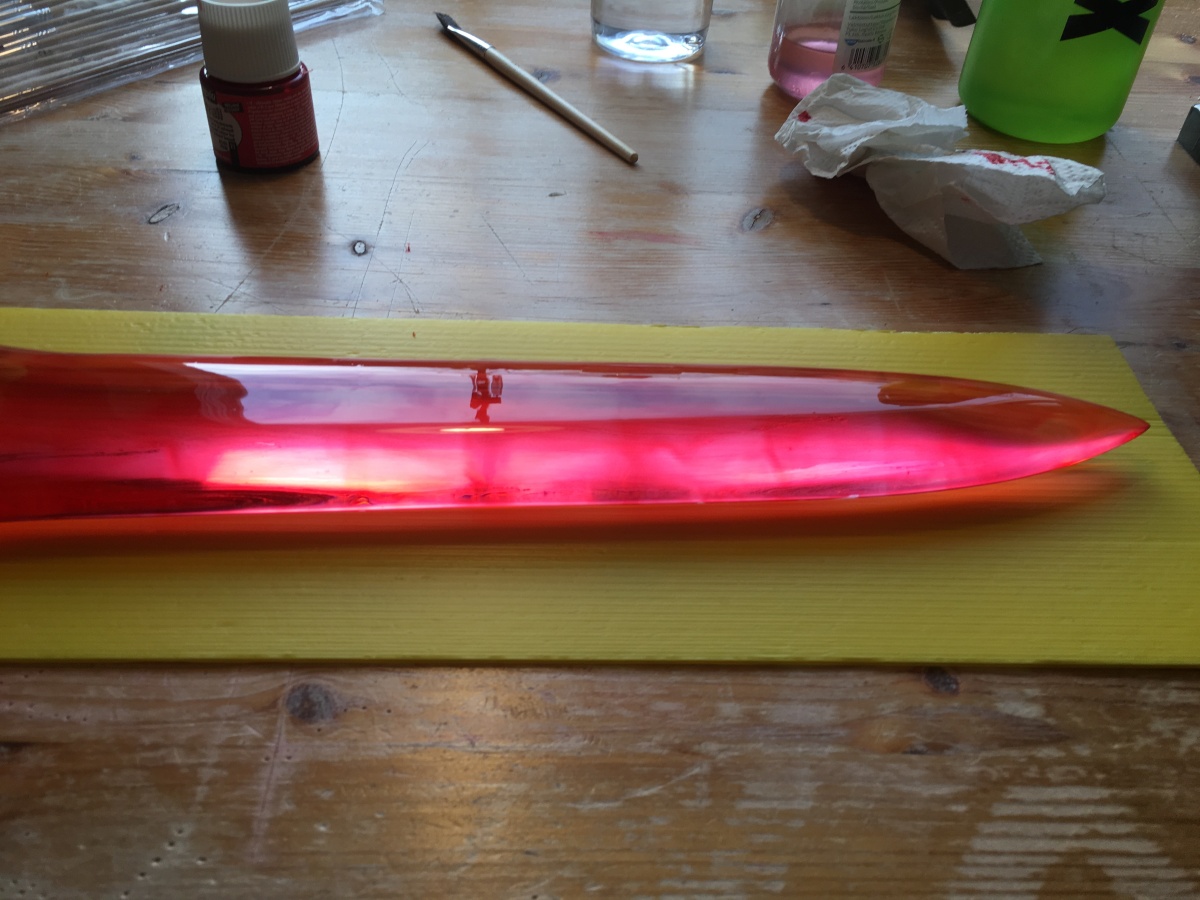 A sneak preview of my latest project. Can you guess what it is? 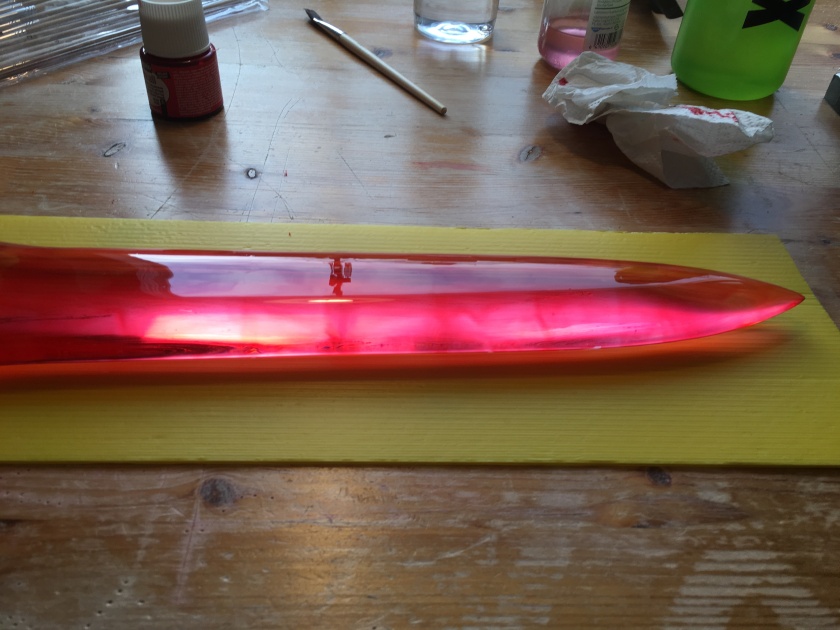 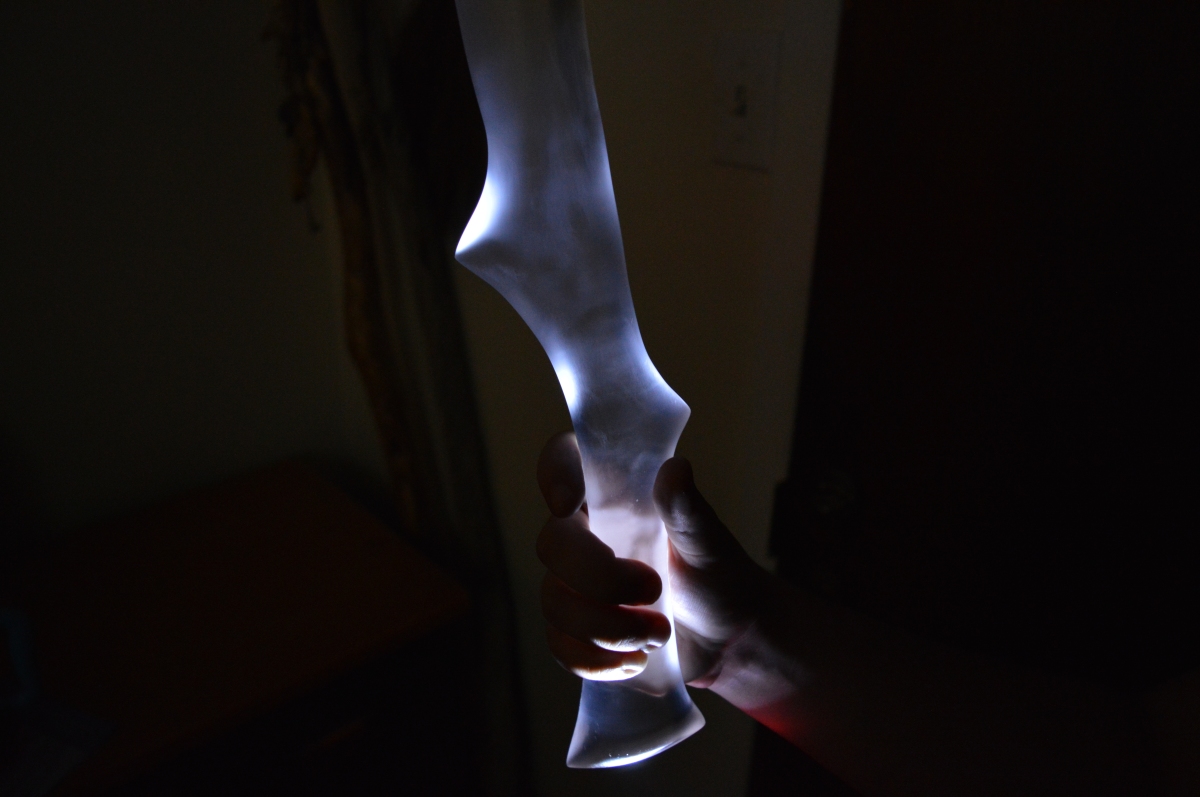 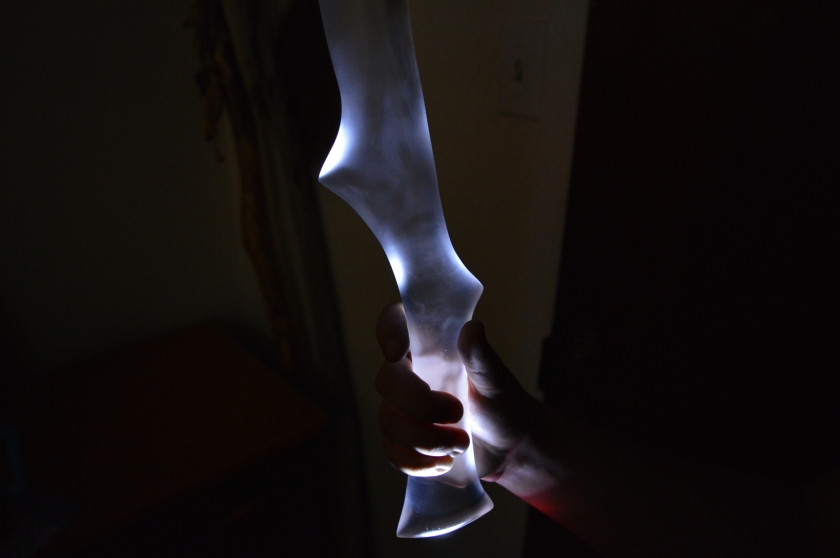 At long last, I am pleased to present you with the Seraph blade Azrael. It’s been finished for some time now, but I have only had a chance to post about it now.

Azrael is the largest and longest blade I have ever crafted at the time of this posting. Its total length comes in at a whopping 30 inches. It can be wielded with one hand or two though due to it’s length and weight, I recommend using both hands.

This was the last blade to be forged in the Adamant Studio in Montreal before I moved to Finland and I’d like to share with you the making of my favourite sword to date.