Okay, so I was trying out some resin from my local hobby shop. This resin is from Artidee, a German company. Cool. I like buying within the EU.

First thing I notice is that the hardener seems to have solidified? Oh, the package says it needs to be shaken if it’s been sitting for awhile. Okay. I shake it. Still has some flakes in it but I hope that will integrate when I mix it.

I go a head and pour it into the mould.

It FOAMS. It foams up out of the sprue, up out of the vents, out from between the mould seams. I had to tape down the central part of the mould there because it was LIFTING it up out of the socket! I have never seen a resin do this before. It wasn’t even hot! No steam. No weird smells. Just foaming like a maddened animal.

Naturally (or unnaturally), the doll head it produced was uh … interesting. What was happening? I thought maybe it was the bit of white dye I put in the resin so I tried casting it without the dye and putting it in the ComposiMold transparent mould just to see what it was doing. Well, it still foamed, and … 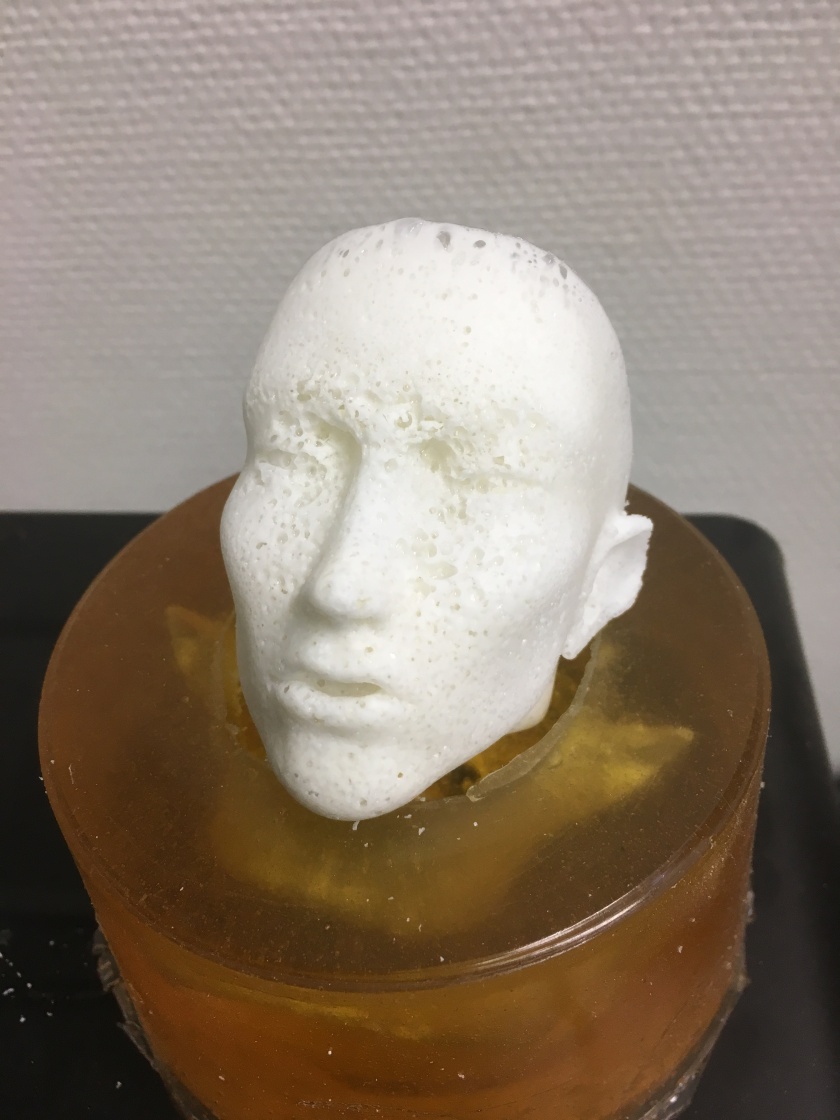 It’s crackling! It’s snap-crackle-popping like Rice Krispies! It continued to pop and crackle for HOURS after it cured. Sitting there … staring at me … asking “Why was I made … why … brought into this … eternal torment … what have you … done?”

I’ve contacted the hobby shop in hopes that I can get an exchange or refund. The resin has obviously expired. I’m getting awfully tired of being sold expired products. I think I might actually write to Alumilite directly and ask them if there’s a way to tell how old a particular batch of resin is and, if there’s no reliable way to determine if its spoiled or not, buy directly from the manufacturer and just eat the shipping costs from America like a chump.

What else did I play with last week in the world of goo? Well, I used Alumilite Water Clear (my favourite resin) with some white resin dye. My hope was to make use of the Water Clear’s 15min pot time to get alllll those evil air bubbles out of the cast.  Now, this worked well with a wee bit of dye. (Less than 1 gram.)

The one on the right there is how it came out. A kind of ghostly, ethereal whiteness. Slight translucence at the tips of the ears and just around the thin parts of the eye sockets. Cool! Buuuut not what I was supposed to make. I’m supposed to be making opaque white heads! Okay so I tried it with about 2-3 grams of dye. 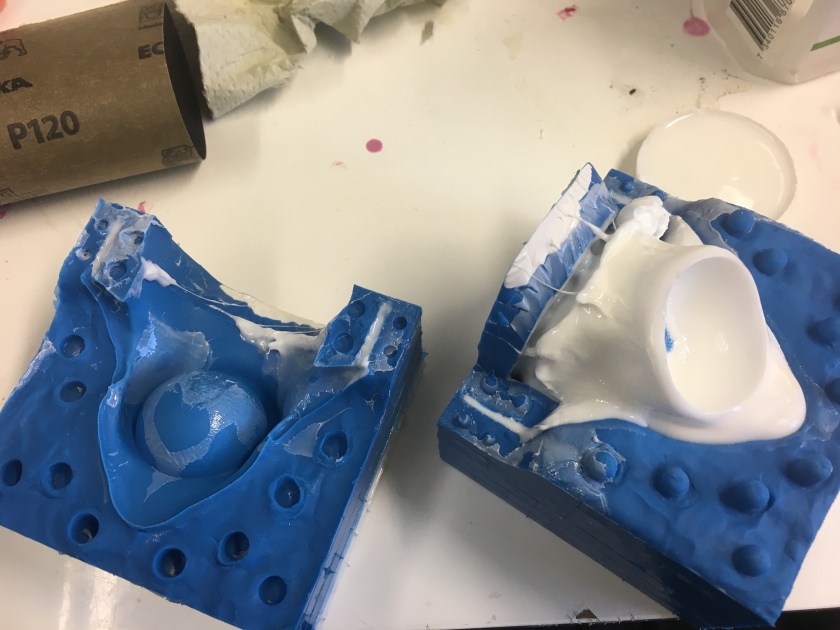 Annnd it didn’t cure. See that sticky, goopy, melted-marshmallow stuff? Yeah. Uncured resin. And it’s exactly as sticky and messy as it looks. I have used a total of 3 litres of acetone cleaning up my experiments this past week.

It’s been a frustrating week guys. A very frustrating week. I ‘m just going to muck with my Sariel sword and witchlight prototype until my new shipment of white ALUMILITE RESIN comes in. No more messing around. We’re going to do this thing right.

Oh, uh, if I don’t post again in a week, please send an exorcist. The doll head probably got me…