So I’m a fan of Cassandra Clary’s Mortal Instruments series. And my friend Scarlet and I are going to cosplay as Shadowhunters for Otakuthon and Comiccon. Woohoo! Well, one of the things necessary to a Shadowhunter’s gear is a stele. It’s a cross between a wand and a tattoo gun. Yes that’s just as awesome as it sounds.

As the description states, each Hunter’s stele is different and tends to reflect something of their personality. Instead of trying to replicate one character in particular, I decided to get creative and do my own Shadowhunter. As such, I mucked about with my crafting materials and made something unique.

I wanted it to be practical so I decided to build it around a sharpie marker so that we can touch up our Marks while at the convention. 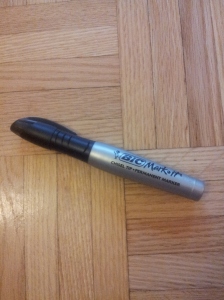 First order of business is to take the clip off the cap of the sharpie and sand it down flat. Then, I wrapped some sewing thread around where the cap meets the marker. You’ll see why in a second.

This is draft stop tape. Very flexible. Much better than duct tape for this. I covered the marker with it and then I took the bit of thread I left dangling outside the tape and pulled. This unravelled the thread and cut the tape neatly around where the cap opens. This way, I didn’t have to go hunting for the seam and cut it.

I glued twisted twine around it and gave it a second coating of draft stop tape. I put a crystal on the top of the cap. 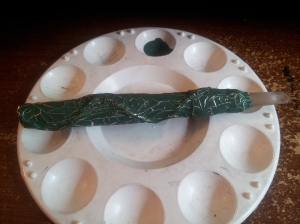 I then painted it with a crackle coating. Once it was dry, I glued another flat crystal on the other end to give it a finished look and painted it hunter green. The crackle medium made the silver show through wherever the seams and wrinkles in the tape were giving a really neat effect. 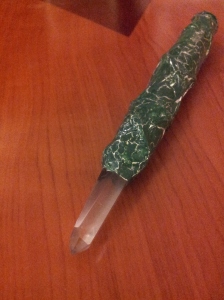 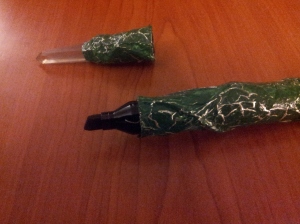 Tada! Stylish and practical. Now all I need is a Seraph Blade and I can go hunting. Wish me luck!