I have big news guys! I’m switching publishers for my novel, Blood of Midnight: The Broken Prophecy. Up until now, I’ve been with Lulu and as of now I will be changing over to Createspace.

There are several reasons for this and I want to present them here for you so that readers will know what they’re getting and anyone interested in self-publishing as I have will get a good idea as to which company’s services they might like to use.

First, let’s talk about the quality of the product. Here is a side-by-side comparison.

On the left is Lulu’s version of my book. On the right is Createspace’s.

See the white band down the right side of the Lulu version? This stands in testiment to the fact that despite 15 iterations of the same cover, Lulu was unable to get the image to properly fit on the cover. I actually had to accept this as their finished product after a 2 month long struggle to get all the spine content to actually be on the spine.

Notice I said “on the spine” not “aligned properly on the spine” and there is a very good reason for that. Could not be done.

Createspace, as you can see above, had no problem aligning, cropping, and printing the product exactly as I wanted it.

Not only that, but they did it right the first time. The backs of both books are pretty much the same so I won’t waste your time with that. What does the inside look like? 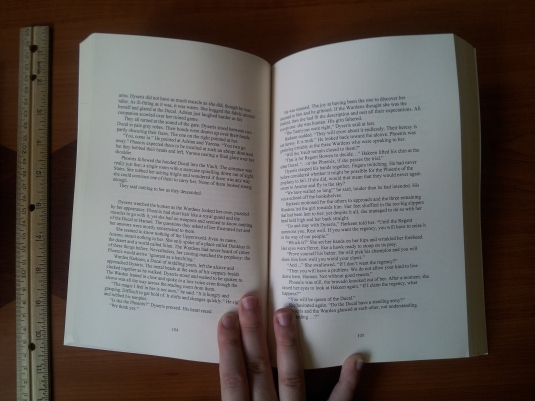 Not much difference there. Createspace gave me bigger margins and justified the text a bit differently. The paper is cream instead of stark white. All things no one cares about. So let’s talk about the next reason I’m switching: ease of using the software.

I’m not going to lie to you. Lulu’s uploading and proofing process was a nightmare. It took two months with my editor, my graphic designer, and myself all working on it and I still did not get the product I wanted. I eventually ended up giving up a full eight weeks after the intended launch date and accepting their result as the best I was going to get. This meant that I did not get to launch both my e-book and paperback copies at the same time as I wanted to and the paperback effectively missed the Christmas rush which would have been a great financial boon for me.

I was so stressed about the thought of even trying to do this again that I had my friend Scarlet Jory come over and walk me through Createspace’s uploading procedure. Turns out, I didn’t need the help, but the moral support was welcome.

Why is Lulu’s software so hard to use? It has no preview feature. You cannot electronically preview and proof your product. With Createspace, you can see it exactly as it will look when it’s printed. No fuss.

So how do you proof a Lulu book? You have to order a copy of your book every time you want to change something. Despite the discounted price to the author for buying their own book, I still had to pay 18.00CAD and wait for two weeks each time I changed something. No, I’m not kidding. Yes, it is ridiculous.

Fortunately, there is another option.

Now, I’d like to share another excellent piece of news with you. It is regarding the price of the book. Lulu sadly obliged me to charge more for my book than I wanted to. The price ended up being 23.50CAD. I’d consider that fair for a hardback but not a softcover! Still, I had no choice unless I wanted to make zero dollars in royalties.

Since Createspace is directly owned by Amazon, they don’t take an extra cut out of my profits and I can afford to price it much, much lower. You can now own a Blood of Midnight: The Broken Prophecy paperback for 15.25CAD which is far more reasonable for a print-on-demand softcover.

Other differences in service? If you need help, Createspace gets back to you in one business day. Lulu … it could take all week. That’s not to say that Lulu doesn’t care. I’m not here to tell you they’re bad people. I am here to tell you that they need to step up their game.

If you were on the fence about choosing between these self-publishing options, hopefully this was enlightening for you. And if you’re wanting to buy the paperback, the permanent 8.50CAD drop in price will be welcome news indeed.

As always, thanks for stopping by.

9 thoughts on “Createspace VS Lulu – Why I’m Switching”