Good news everyone, you might have a free skirt hiding in your house. With climate change being such a hot topic (pardon the pun), many people are finding out that the eco option is very often the economic option as well. With a little creative thinking, old, worn-out items can be re-used as something cool and inventive.

My wife and I both tend to wear through our jeans in the crotch and thigh area because of how much walking we like to do. While it might be cool to put a patch on a tear in the knee or hem, a patch on the crotch is really weird-looking. But I kept stowing away ruined pairs of jeans because the damage was localized to a very small (if unfortunate) place. So much perfectly good fabric!

I’m a-frayed these are beyond repair …

If you have jeans that are in mostly good condition, or perhaps ones that just don’t fit right anymore, you might consider this little project and give yourself or your sweety a brand new skirt! It even has pockets for keys and wallets and such which few women’s garments tend to these days.

My wife now has this lovely petal-like skirt for when the weather warms up. (hint: Go away snow!) 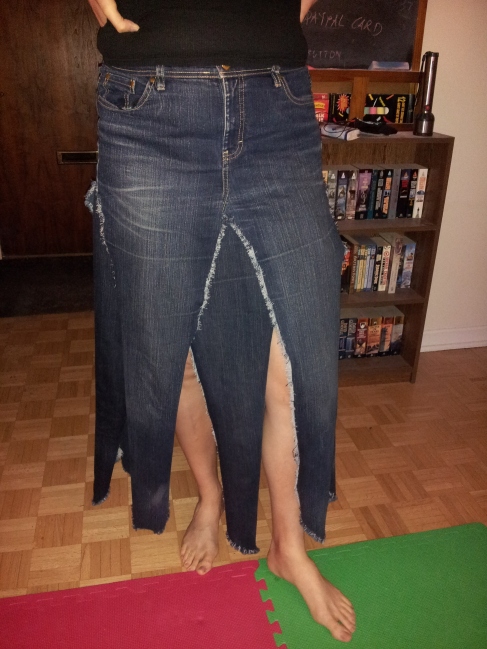 No sewing machines, no measuring, no problem! Let’s get started! 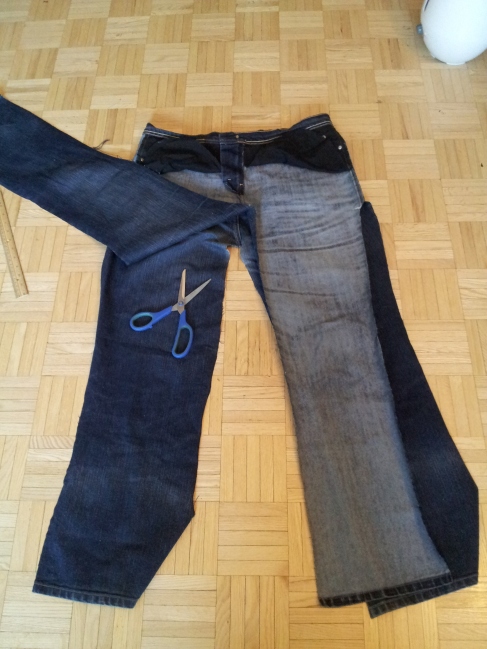 Step 2: Cut the legs off of one pair of pants.

This will give you four unattached segments of fabric to play with. 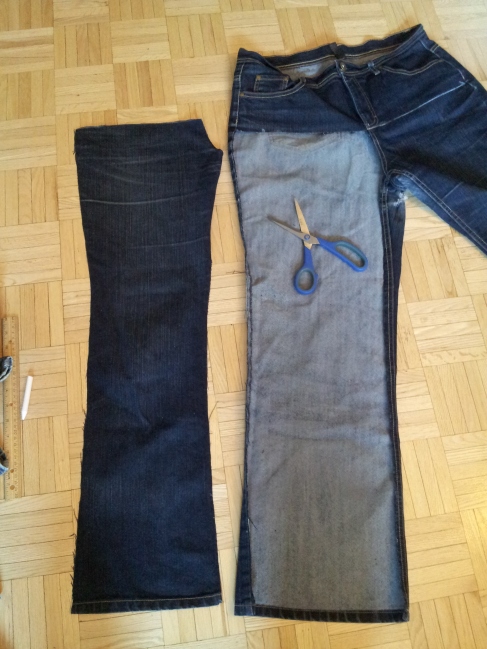 Step 3: Place the segments in the gaps of the other pair of pants.

Remember to keep the skirt turned inside out while you’re sewing. You don’t want any of the stitches to show.

I used mending adhesive to hold the segments in place while I sewed but you don’t have to do that if you don’t want to. If you do, though, be sure to leave a couple centimetres around the edges of where your gluing so you can sew. I attached the segments to the main pair of pants with an blind stitch. This is super easy even if you’ve not done it before. Just do a regular running stitch, in out, in out, but pay attention to where your needle is going. Only catch a few threads on the backside of the garment and don’t let the needle poke all the way through to the outer surface.

Step 4: Cut the bottoms of the segments into wedge shapes.

You don’t have to do this, but if you do, it makes the panels look more petal-like. I simply used the corner of a box to get a nice 90 degree angle. No measuring necessary. Just eyeball it.

Step 5: Fray the edges with a brush.

Take a nail brush or other brush with stiff bristles and brush the edges of the segments so that they fray. I decided I wanted about a centimetre of fringe so I brushed until I got that. This can be a little tricky and might take a few hours but once you have the hang of it you’ll find that there’s a certain angle at which you can brush the fabric so that it frays easily. The direction depends on the weave of the fabric.

Be sure to trim the extra threads that come off while you’re brushing so that your fringe is nice and even.

You can apply a line of Fray Stop or Fray Check at the base of the fringe to stop it from fraying further into the garment. This is important so that it does not get damaged in the wash. You can also do a running stitch along the edges to stop further fraying but this takes longer so I invested 5 bucks in a bottle of Fray Stop. 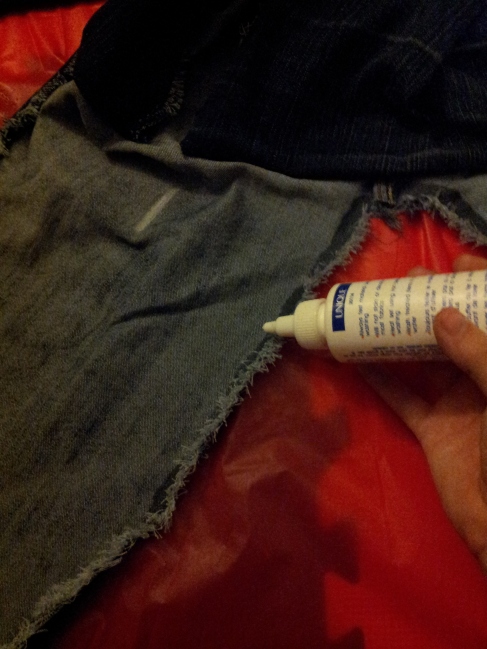 This stuff dries in about 6-10 minutes so there’s very little waiting. It dries clear and flat. As you can see, I’ve made a little chalk mark on each panel as I treated each one because when it’s dry, it’s really hard to tell it’s there.

When it’s dry, heat up an iron to low or medium heat and run it over the segments of the skirt. Remember that these panels were once trouser legs so they’re used to being worn around a leg. You’ll have to iron them to make them hang flat instead of rolling inward on the edges.

Now for the interesting part. How much did we waste? Well, here are the things I threw out sitting beside two pairs of my wife’s jeans.

Which pile would you rather throw away?

The triangular pieces from the bottom of the legs can be used for patches if you so desire. I kept the top of the other pair of pants because they have a perfectly good zipper in case I need to replace one and all four pockets and the button are intact for a similar purpose. The brushed-out threads from the fraying can also be used to stuff pillows if you have one that’s going particularly flat.

That’s it from me for the day. Saving the environment, fashionably.