I bet you thought I was exaggerating yesterday with my post. No. No, I wish I were. I walked for two blocks on a single street in my neighbourhood snapping photos of Halloween fails. Here they are and here’s how to fix them if you find yourself committing the same offences. Identifying markers have been obscured to protect the tasteless. 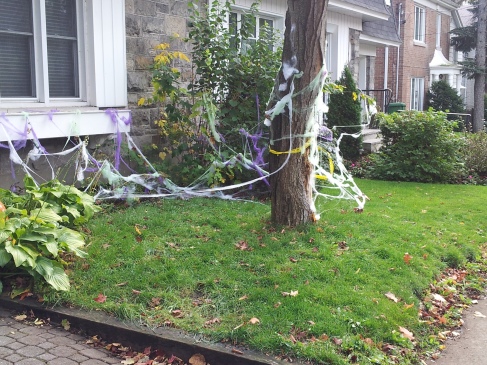 What happened here? Seriously, did a giant can of silly string vomit on your lawn after eating Barney the Dinosaur? 1. Spiders do not build webs that are purple or green. 2. Spiders build webs primarily to catch prey. This couldn’t catch a cold from a toddler. 3. LAZY.

Spiders do build giant webs that cover trees. They look like this: 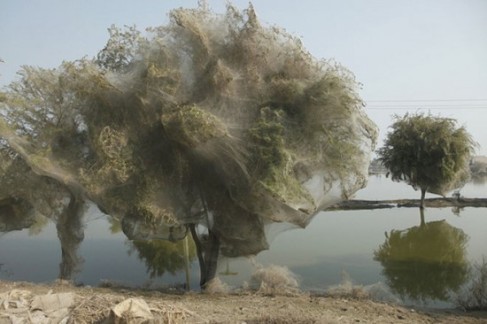 (This lovely little nightmare is courtesy of Geekosystem.)

The fix: You’ve got to stretch the fibres of the web out until they form gauzy, transparent sheets. Otherwise, they don’t look like spiderwebs. They look like really cheap, awful garland that has been through a dog and out the other end. 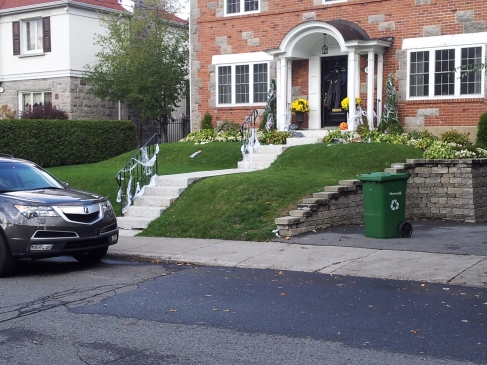 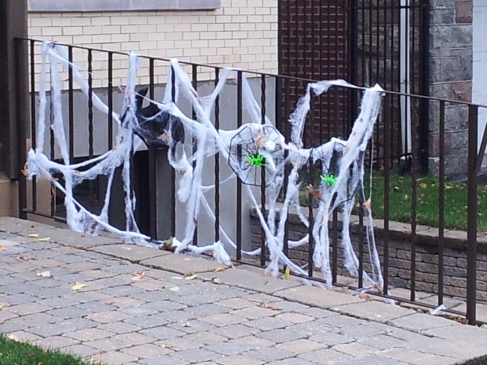 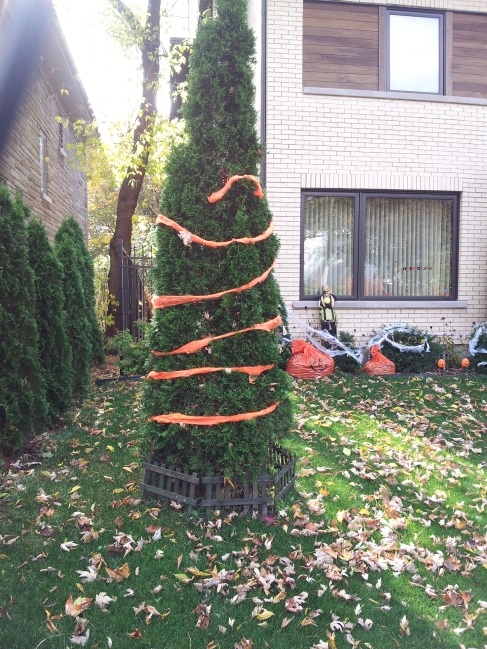 Spiderwebbing is not garland! It’s not tinsel! More than that, though, don’t mix two different kinds of webbing together. Pick the style you want and go with it. If you want a net type web made of string, cool, do that. If you want gauzy, realistic webbing, lovely! Make sure to stretch it properly. But don’t put the two together. That’s like plaid and polka dots.

Now, let’s take a closer look at that last offender. 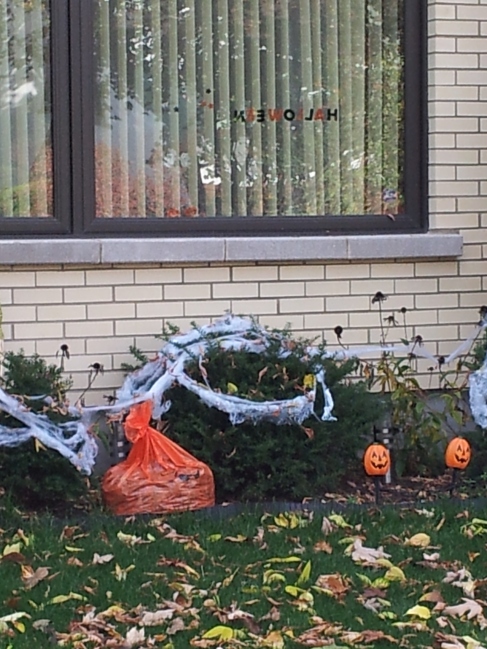 Where do I even start … Look at the window. Notice that HALLOWEEN is backwards. Not only is this silly looking to everyone passing by, but it pretty much screams “I didn’t do any planning!”

There are two little pumpkin lights staked down there in the garden. Just two, clumped together. What the decorator needed to do is either stake them at the corners, or buy a decent number of them and put them at intervals along the garden edging as they’re supposed to be.

Get rid of the trash bags. Yes, I know they have pumpkin faces on them. They’re trashy. They’re worse than those horrific (and not in the good way) plastic lawn ornaments that light up from the inside. In the twilight hours when you’ll actually have trick or treaters coming around, it will be too dark to see the faces and they will simply look like you’ve lazily left your garbage in your garden and are hoping people will think it’s a decoration. Bags of leaves compress within a couple of days as the organic matter settles and begins to decay. The bags will slouch and will also get dirty, and will in no way look how they do on the package. Don’t use these things. Ever. 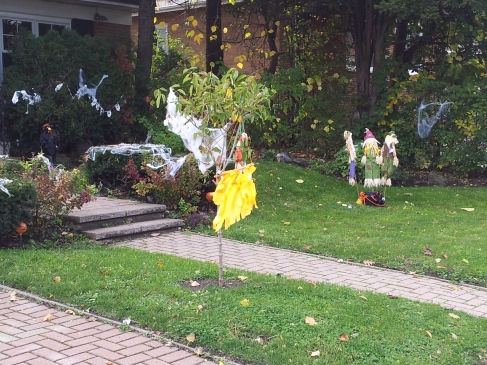 Decorations need to be evenly spaced and they need to be sized appropriately for the amount of space you’re dressing. Do not just throw them willy-nilly around the place. This looks like someone just hauled up a box of decorations from the basement groaning about what a chore it was and haphazardly stuffed the decorations onto the shrubberies outside. “Fine. Done. Whatever.”

If you’re not going to put effort into making your decorations look good, don’t do it at all. Please. This goes for any holiday, not just Halloween. It makes the neighbourhood look crappy and it makes you look lazy. If you don’t care about what you’re doing, it’s blatantly obvious.

Most of these decorations here are from the dollar store. That’s fine. You can make those look good with a little planning and a sense of taste. There are endless how-to guides on how to make awesome looking stuff for cheap, or free if you’re clever and use what you’ve already got around the house.

Ethan, why did you take a picture of a perfectly normal hou … ohhh wait. I see the decorations but I kind of have to squint.

The webbing on the bush is actually halfway decent though it could use some more stretching. It might have gotten mangled by the recent rain and wind so I’ll give it a pass. But look at those tiny decorations just orphaned in the middle of the lawn. This is a huge freaking house. It needs larger decorations.

If larger decorations cannot be had for whatever reason, consider making a single focal point, perhaps around the door where they will get the most attention on Halloween night. A large picture window is also a great idea to dress up. 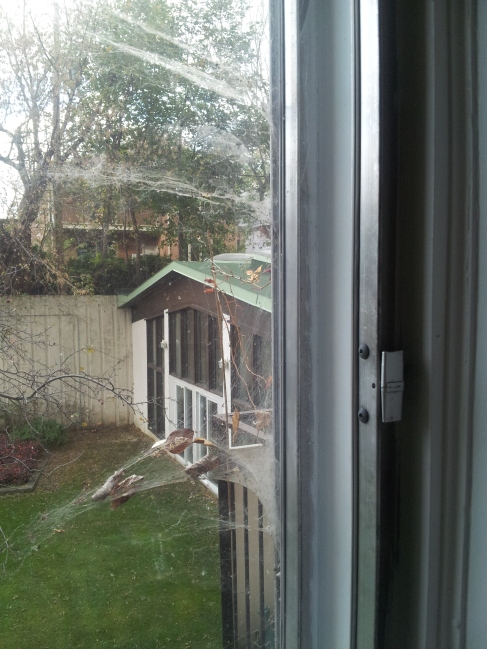 Lastly, this is not a decoration. These are honest-to-Cthulu spider webs on the outside of my kitchen window. They were made by funnel spiders which are very common in this part of Canada. Nature has presented us with perfectly good examples of the weaving done by our eight-legged friends. Why do so many people get this wrong?

Before I go, edit chapter 12 of Blood of Midnight: The Broken Prophecy, let’s review what we’ve learned today:

1. Spider web is not garland.

2. Garbage bags are not decorations.

5. Don’t half-ass your decorations. We can all tell.

Now go forth and make your home an evil lair to be proud of!