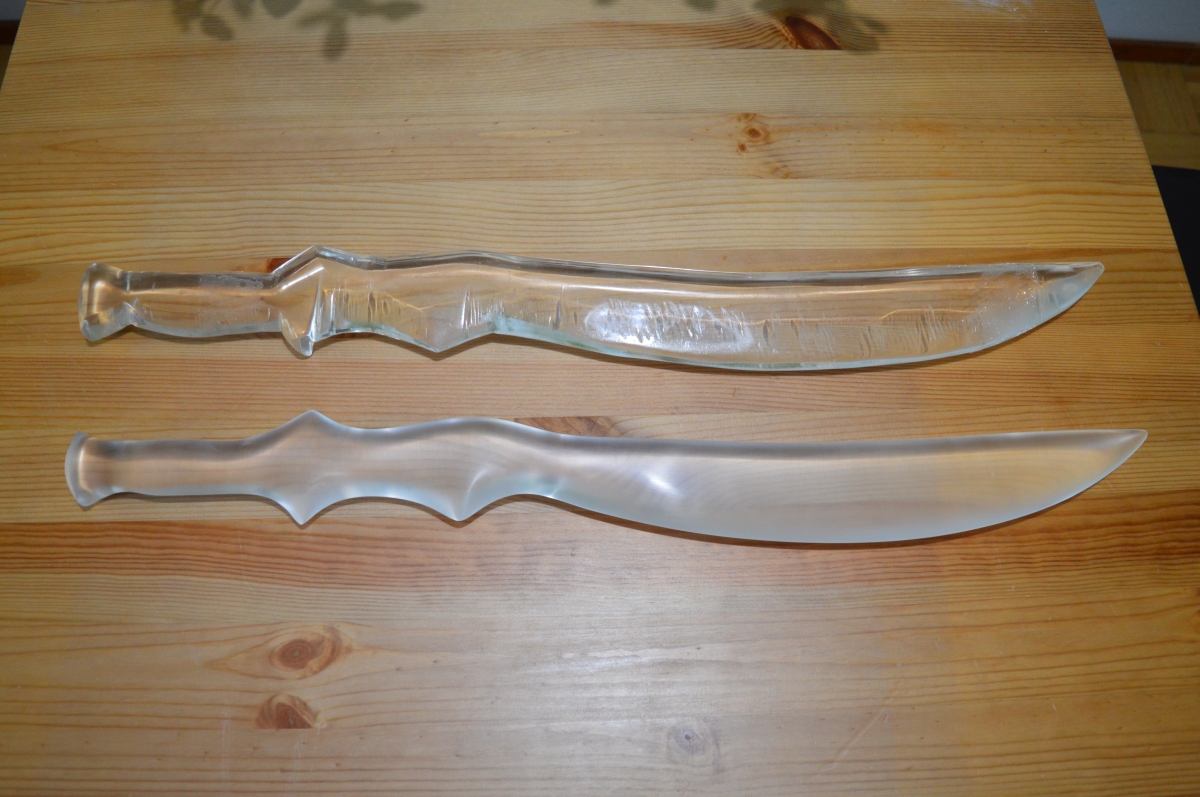 Hi all! As I look over the re-finished show blade beside one of the untouched originals, I realize how much I’ve learned since I first began crafting Seraph Blades. I have better tools, better techniques, and a better understanding of just what the medium of acrylic is capable of.

The difference is rather shocking.

In 2013, a friend of mine convinced me to cosplay a shadowhunter with her as an entry to the Montreal Comic Con Masquerade. We both share a love of Cassandra Clare’s Mortal Instruments series and wanted to give the Masquerade a whirl just to see what it was like.

With alcohol-activated paint that would not smudge, the runes were a cinch. Similarly , crafting steles was no problem. There are a ton of second-hand clothing stores in Montreal to find black leather gear. But there was one thing we still lacked: Seraph Blades.

There were no distributors of transparent swords anywhere. Believe me, I looked searched for days. There weren’t even instructions on how to do anything like it. It was up to us to invent a solution.

Another friend, Sister Verbena, helped me to acquire inch-thick solid acrylic from Johnston Plastics, a local industrial plastics manufacturer. The only way we could cut something that robust was to make use of Verbena’s band saw. When we first started doing this, Verbena honed the edge of the blade somewhat for me. This left gouges all along the blade of the sword which you can still see in the photograph above.

At the time, I was using metal files to shape the blades and I really REALLY don’t recommend it. You will be so stiff from the repetitive motion that you won’t be able to move at the convention. Partway through the crafting process, Verbena hit on the idea of the band-sander. It was big, it was LOUD, and it was so heavy I could barely lift it. We called it Col. Sander, or just “The Colonel” for short. 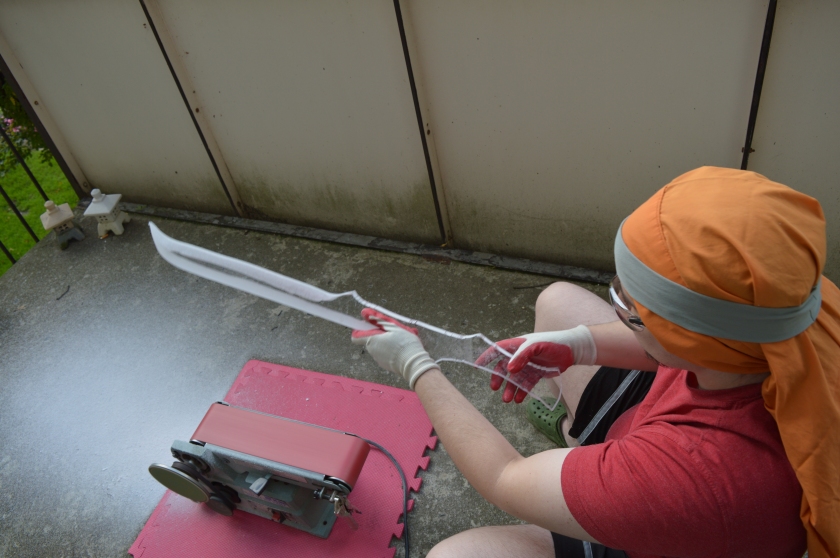 That made a huge difference in crafting time and my muscles were very thankful for the change. We began just cutting the outline of the swords and doing all the shaping on the Colonel.

I barely finished the blades in time. There was no time to fix the gouges and imperfections. 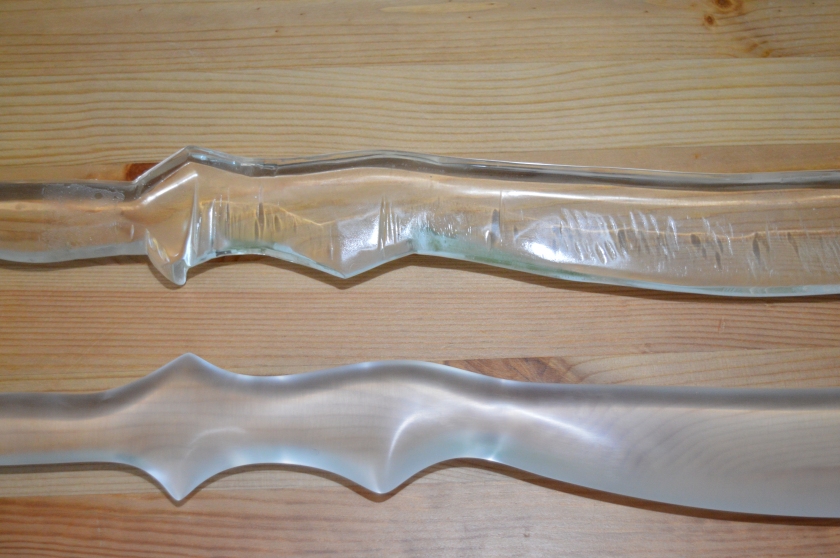 Without proper knowledge of the tools and what was available to me, I decided that flame-polishing was the way to go to achieve crystal clarity.

It did the job, certainly, but there were a few issues. The process left “smudges” in the surface of the blade that couldn’t be cleaned off. I didn’t have time to buff the trouble spots and re-do them.

Perhaps it was the wrong temperature. Perhaps the torch used the wrong kind of fuel and left some sort of residue on the plastic.

Whatever the cause, I was too pressed for time, and too new at the art to fix it. That is, until now.

Believe it or not, this is the same blade as the previous picture. I took it back to the belt-sander, removed all the gouges, and polished it manually. I no longer flame-polish because I can get better results with some elbow-grease and very high-grit automotive sandpaper.

The blade is also much slimmer. When I crafted my first Seraph Blades, I didn’t properly understand how strong acrylic is. I made the blades nearly the width of my thumb! 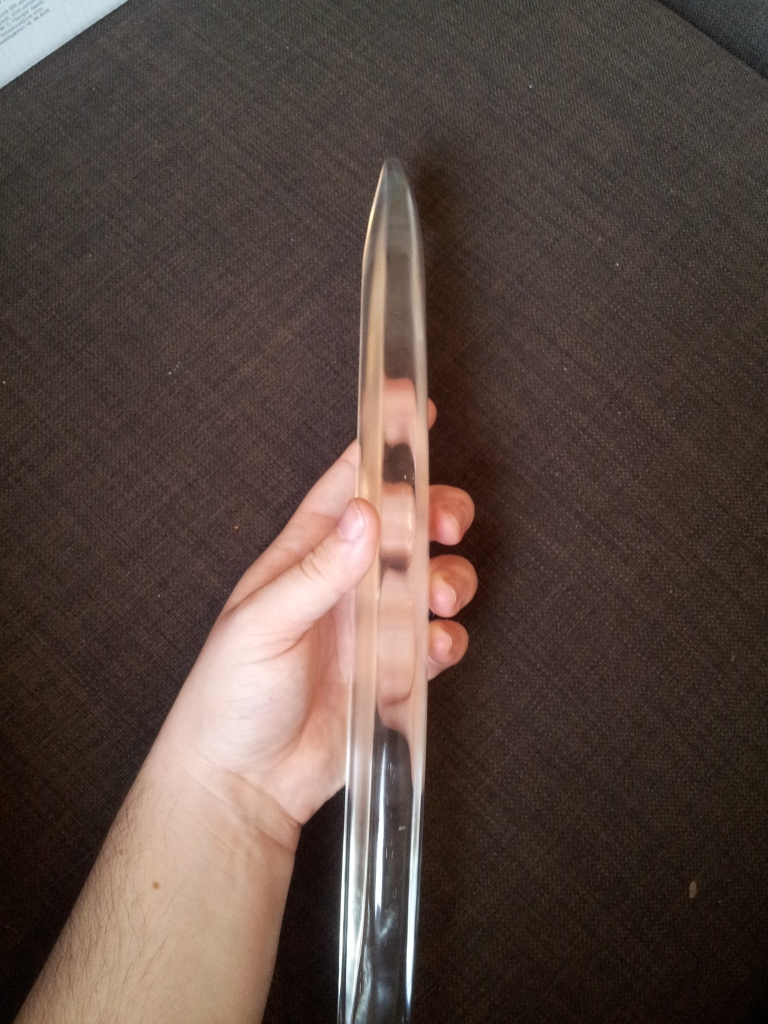 Good lord, there’s no need for all that. Acrylic does not break easily. It’s very resilient. The original blades, as you can guess, were really heavy and awkward to wield.

There we go! That looks more like a blade and less like a gummy bear. The resulting blade is much lighter which is nice both for carrying and for shipping costs.

I hope you’ve enjoyed this little walk down memory lane with me. I’ve learned so much in this endeavour and I look forward to new designs and innovation. To give you a taste of what’s coming up, my next commissions include sculpted leather grips, LED light sources, and arrow-heads.

Stay tuned for news from the Adamant Studio. Until then, happy hunting.