What’s this? He’s updating on a weekend? I know. It’s weird. This week has been full of all-night car trips, late writing sessions and the necessary sleep-ins at strange hours to compensate. Excuses, excuses. I shall make it up to you with weekend posts!

Here I present you with an adorable solution to muscle aches and pains from sporting activities or simply long hours at the office.

Instructions after the jump!

First, let me give a shout-out to Stuwaha for the tutorial that gave me some direction in accomplishing what I wanted with this helpful tool. Keep that tab open, you’re going to need the pattern. There are important differences between this tutorial and Stuwaha’s. that you’ll have to pay attention to if you don’t want to set your house on fire.

1. Print off the pattern from Stuwaha’s tutorial and cut it out. I used cardstock paper because it’s nice and stiff and doesn’t wrinkle while I trace it on to the felt with the chalk.

2. Make sure you have two ninja outlines drawn and cut out. Then, put them together and begin sewing. Don’t sew all the way around. You’re going to need an inch or two of space to put the stuffing in before you close it! You can mark that gap on the felt with the chalk. Don’t worry about the white marks. You’ll be turning this thing inside out before stuffing it. 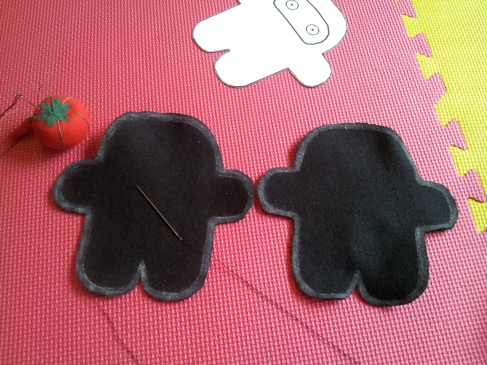 3. This part is going to take patience and gentle persuasion. Slowly turn the ninja inside out. To avoid tearing the fabric, try poking the arms and legs inward first and stick a couple of fingers down through the hole to see if you can grab a foot to help you pull it inside out. If you really can’t get all the fabric through the hole safely, just cut some of the stitches until you can. All this will mean is that you have to do a little bit more invisible stitching later.

You can see the first difference between this tutorial and the one from which I got the pattern. This is simply an aesthetic preference of mine. I don’t like the seems showing.

4. Now we prepare the face. Fairly straightforward. You trace the face stencil onto the flesh-toned felt and cut it out. 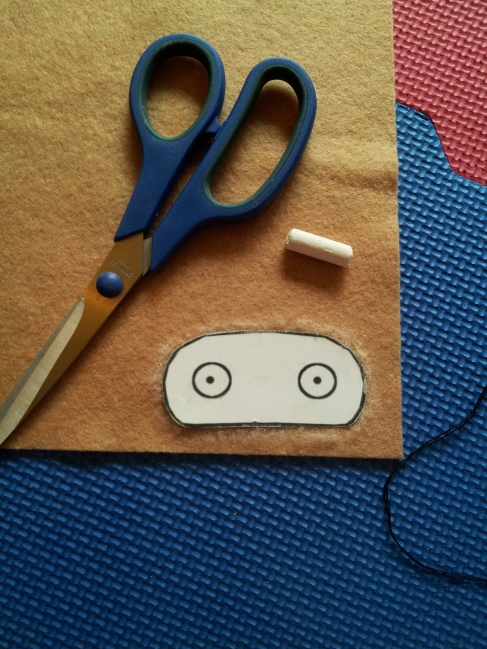 5. Now we use a little glue from the gluestick to hold the fabric in place on the ninja’s body while we sew it on.

7. Now this may be a little tricky but have patience once again. Take a light coloured thread and begin sewing the face plate to the ninja. Be careful not to go all the way through the flesh-toned fabric to the outside. Just catch some of the fibres on the back side of it as you sew it to the black felt. This will mean that you won’t see the stitches on the border of the ninja’s face! 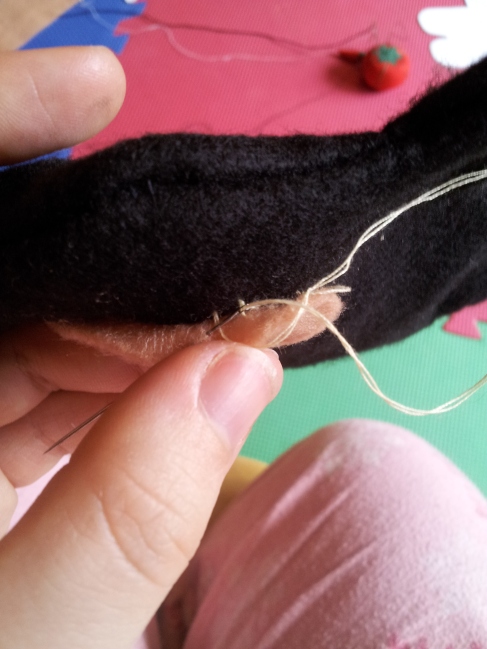 8. Now we cut holes in the face stencil where they are marked. This is the second deviation we have from the original tutorial. The regular ninja plushie has buttons for eyes. However, if we put buttons on this ninja, if they’re plastic, they’ll melt when heated, if they’re metal they will set your microwave on fire. You can try wooden ones if you want. I won’t judge. But I didn’t want any hard things pressing against me while I’m trying to loosen up sore muscles so I did it this way.

Trace small crescents onto the face with the black marker, using the stencil as a guide. Since the ninja’s mouth and nose are hidden, making his eyes closed in happy-squint is the only way we can show that he’s smiling. I like happy ninjas, so I made him smile.

9. Now take the embroidery thread and begin working your way along the lines you drew for his eyes. Just loop the stitches around and around, keeping them tight together so there will be no gaps. Don’t pull the stitches too tight or his face will pucker. Too lose and he’ll have weird little loops in his eyelashes. Just concentrate on getting each stitch to lie as flat against his face as you can without yanking on his skin too much. 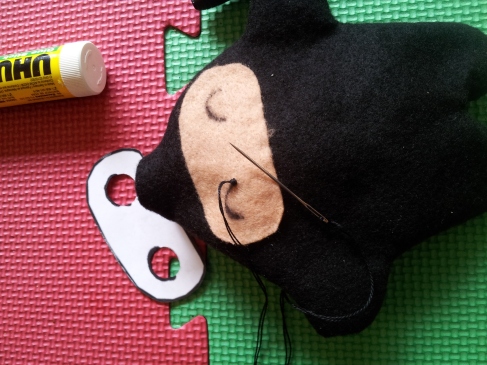 10. Now it’s time to fill him up with rice! I used a funnel but you can just do it really carefully with a small hole in the bag if you like. Make sure you pause frequently to massage the rice into his hands and feet. He should be mostly full but still a little bit squishy. You want him to be able to lie on your shoulder without being so hard and round that he rolls off.

This is the third deviation from the original tutorial. Regular stuffing carries a risk of fire but if you use rice, it will hold the heat much longer without such worries. It will also be heavier so you can keep it pressed on a sore muscle.

11. Okay this part is kind of a pain. We use invisible stitches to close the gap and keep the rice from falling out. It’s really hard to get a photograph of this process. Basically, you need to fold the fabric down into the body a little at a time, and continue the stitches where you left off to close the body.

The gap will get smaller and smaller until it’s closed. Then, to hide that last bit of thread, push the needle back through the ninja and out again between a couple of your previous stitches. Pull tight so that the fabric puckers, then cut the thread close to the body. When you massage the fabric back into the shape it should be, the thread end will retract back inside the body so you can’t see it anymore. 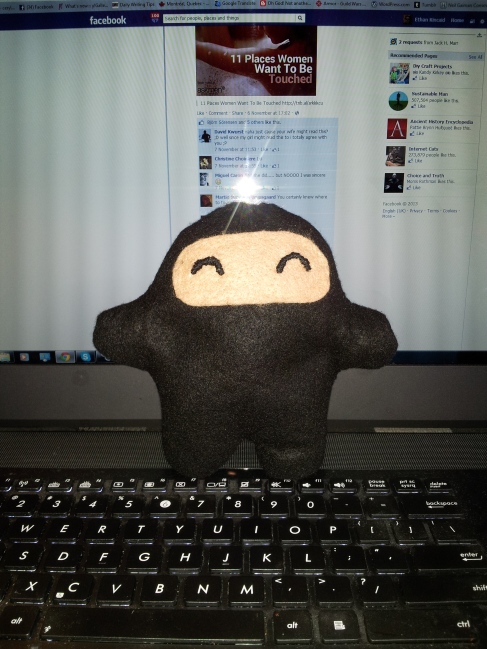 Tada! Done. Now you can put your ninja in the microwave for one minute to warm him up. Give him some squishing after he comes out so you can make sure he’s evenly heated, and place him on the sore muscle.

Another use of the ninja rice bag is to make two of them and stick them in your coat pockets to keep your hands warm in the winter. I find they generally stay warm for about 30min to an hour depending on the circumstances. (ie: how cold it is and whether or not you put a towel or blanket over them while in use)

Hope this helps you! Take care and thanks for stopping by.