One of the trickiest bits of a shinigami costume from the anime Bleach (aside from the hair) is the sandals. Unlike the quality uniforms that you can order online, the sandals that are available for purchase are pretty sub-par quality wise and don’t fit the feet of the wearer the way a custom made pair will. The good news is: they’re pretty cheap and easy to make once you get the hang of it.

I found a pretty good guide online for how to make the sandals here. However, I found the pictures to be a little unclear and some of the directions were incomplete such as how to actually do the weaving which resulted in quite a bit of trial and error.

So, I thought I’d present an updated guide for you to make use of. I hope you find it helpful!

END_OF_DOCUMENT_TOKEN_TO_BE_REPLACED

So my editor got back to me with a fixed-up chapter 3 for Blood of Midnight: The Broken Prophecy. Glad to see you feeling better Kal!

I had a bout of insomnia last night so I decided to make the best of the situation and worked on the chapter while the sun rose. So eerily quiet! But on the upside, I got most of the work I had scheduled to do today done before the alarm went off. Go me!

I also got most of the Book That Bleeds completed which is not actually a writing project. It’s a costume prop. I’m going to this year’s Montreal ComicCon and I’ve decided to cosplay as a Drow. I love elves of all sorts but this particular variety has got to be my favourite because of their interesting culture. And before you ask, no, I’m not a super-rare good Drow seeking to redeem himself from the evil ways of his people. Nope. I’m a standard run-of-the-mill evil Loth-worshipping Drow. Yay!

As you might have guessed, aside from writing, one of my passions is costuming. I usually make my own costumes and my wife’s as well. This year is no different except that the budget is a little tiny bit bigger than last year. Perhaps I’ll share some of my in-progress costume-creation shots!

But that can wait until after I finish this fresh-ground hazelnut coffee. Mmm.

14 Writers Handwrite Their Writing Advice on Their Hands

As writers, the tools of our trade are always with us: our hands. Here’s some great gems of advice from authors about how to make good art.

For centuries, legends of the ancient sorcerer known as the White Asp have been told.

But this demon is writing a new tale in the blood of the slaughtered, as cities and kingdoms fall to his relentless assault. In a desperate bid for survival, the Stonehart clan places its hopes on the shoulders of Damon, whose blood magic is the strongest of all of his kin. Thrust from childhood onto the battlefield, Damon must find a way to stop the sorcerer’s onslaught.

Born with only half of their magic, every Stonehart must seek out their Reflection to gain their full power. Damon’s match, Phoenix Solara, escaped the Asp’s holocaust but fell into a strange world where bird-men live underground and stew in madness, pining for a sun they cannot see. Separated from her mystical counterpart, Phoenix can only reach Damon in snatches of time when they are both dreaming.

Damon seeks the knowledge to save his people; Phoenix searches for the power to escape her prison. But even if they find a way to aid each other, will it be enough to repel their common foe, or will the world be crushed under the coils of the White Asp?

Sound like something you’d like to dive into? Hopefully yes! This is the blurb for my fantasy novel, Blood of Midnight: The Broken Prophecy. It’s currently scheduled to come out this winter.

As a status report: My manuscript is currently at the editor’s. A bout of illness prevented him from getting much done over the past month. Feel better soon Kal!

Next up, more great advice from authors written on their tools-of-the-trade: their hands.

I’ve had people, many of them friends of mine give me a pained expression, full of well-meaning worry for me and my livelihood, when I tell them I am self-publishing. I tell them that the book publishing industry has changed. It’s a brave new world full of new opportunities for artists to connect directly with their audiences.

Yes, it’s frightening to take that leap of faith and do something outside of long-standing tradition. I’m doing so, and Mz. Palmer’s TED talk here is precisely why.

I don’t want to connect with a publishing house. I want to connect with you. I don’t fancy giving 80% of my money to a middle-man to stand between my readers and myself. I want people to be able to enjoy a good fantasy novel for no more than three dollars and to be happy with that investment.

That’s why I have decided to put forward my art this way; I trust you.

The Pursuit of Happiness.

Thanks to my friend Sizigyy for posting this. This, for me, is what it’s all about, and the very reason for the title of this blog. 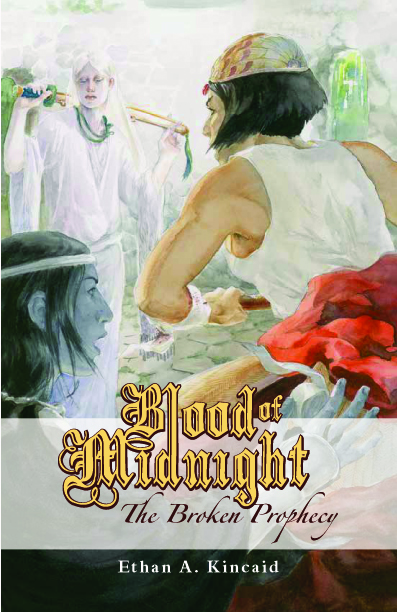 This is the front cover of my book, coming out this winter. I’m very excited! It’s a fantasy novel in which a young man stumbles into adulthood on the battlefield and a young woman torn from the world she knows by disaster. Worlds apart, they must somehow help each other to survive before all is lost.

Art by Sarah Cloutier. Lettering and formatting by Kristy Laporte.